The area around The Hague Central Station is one of the places where the city wants to realize homes and workplaces for the rapidly growing urban population in the coming years. The Bellevue location (the area between the Rijnstraat, Koningin Julianaplein, Bezuidenhoutseweg and the Oranjebuitensingel, next to the Hoftoren) will be transformed into a modern and lively part of the city center. 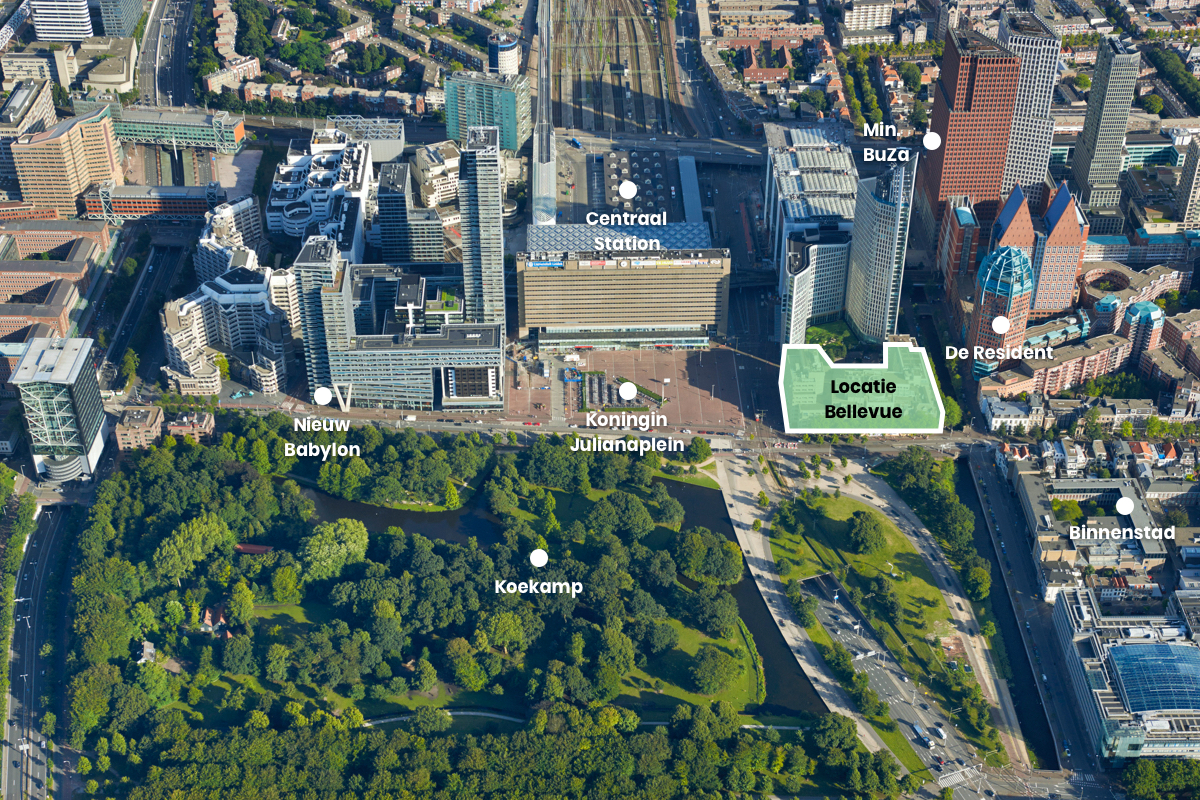 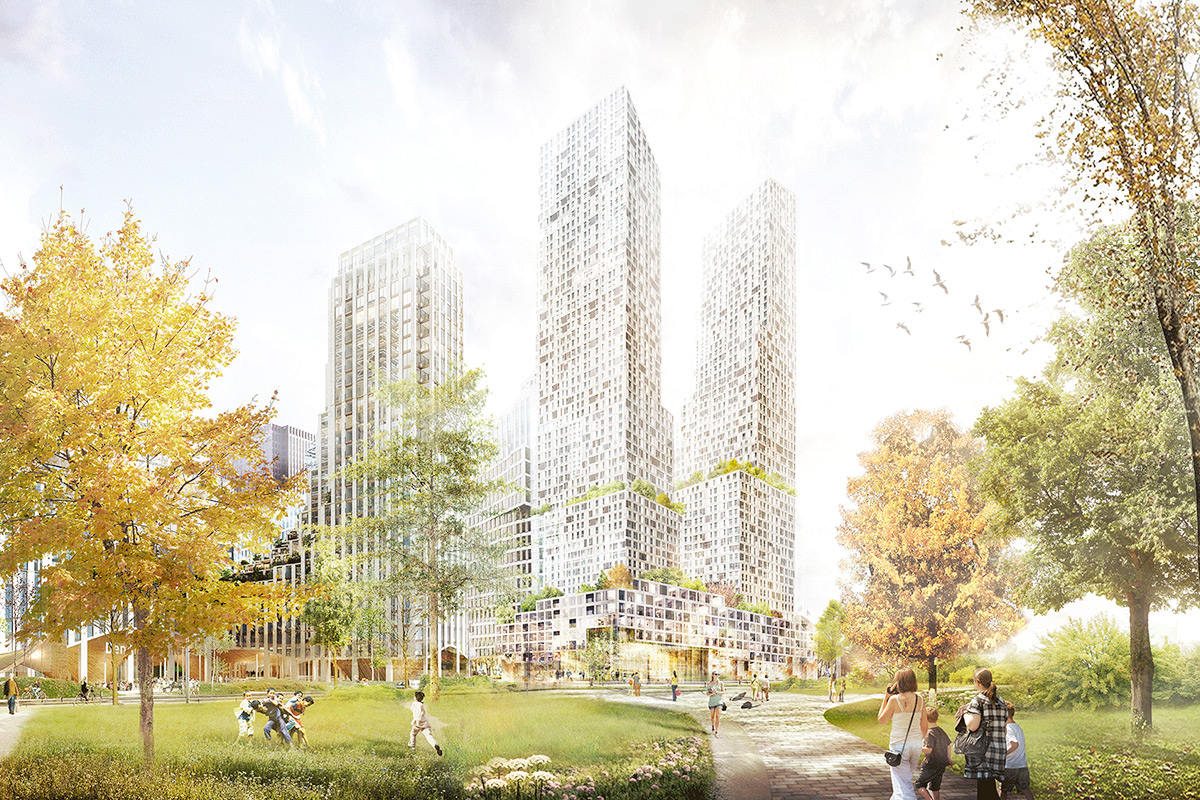 The area around the Central Station of The Hague will be upgraded and modernized in the coming years. The ambition is to enhance the area to make it an attractive and bustling heart of the city. A place where economic growth and employment can develop in a pleasant, more vital and green environment in which living, working and leisure reinforce each other. The owners of the office buildings located between the Rijnstraat, Koningin Julianaplein 2, Bezuidenhoutseweg 1, 5, 11, 27-29 and Oranjebuitensingel 6, have taken the initiative to re-develop the so-called Bellevue-site next to the Central Station into an attractive and sustainable livingworking  and recreational area.

The proposed plan concerns a new development with a mixed-use program, comprising offices and amenities located in the urban layer and green recreational spaces integrated into the building. Two towers will house (rental) apartments for a wide target group (young and elderly households) who would like to live in a dynamic and vital environment in the heart of the city, surrounded by greenery, close to public transportation modes and with access to a wide range and high quality of modern amenities. One of the important highlights of the envisaged development is addition of a semi-public atrium at the core (heart) of the building, which will be situated at the intersection of the new (to be created) pedestrian pathways connecting the new development with the Central Station on the one side, and the historical part of the city and the Koekamp on the other side. High-quality amenities will be situated on the ground floor in the atrium and available for residents, office users and the public. The atrium will be a pleasant place to stay with a lot of attention for greenery, good quality air, lighting and a healthy and clean environment. The green courtyard will be connected to the garden of the Hoftoren and will will also be an asset to the city.

Ambitions of the Municipality of The Hague

In December 2018, the Board of Mayor and Aldermen approved the Development Area Agenda ‘Policy Campus Central’ in which the Bellevue site was designated for re-development. PATRIZIA (investor and developer), in consultation with the other owners of the Bellevue site (Staedion, Downtown Developers and PATRIZIA), has taken the initiative to conduct studies for the integral re-development of the site in close consultation with the municipality of The Hague. The plans have been prepared taking into account the key policy documents of the municipality of The Hague, among others, The Hague Mobility Agenda, the Housing Agenda and the High-Rise Buildings Design Guidelines of The Hague Haagse Hoogbouw ‘Eyeline & Skyline’. The “Policy Campus Central” development agenda offers opportunities for densification around the Central Station. The integral development of the Bellevue site fits in well with the ambition of the municipality of The Hague to increase housing supply in the fast-growing city and to stimulate economic growth and development of the Central Innovation District (CID). The Bellevue site will be a prominent high-rise location and thereby will become a connecting node between the modern and the historic parts of the city, connecting The Hague Central Station to the shopping and recreational area. A new-build project will be realized on the Bellevue site, consisting of a mixed-use development program catering to a wide resident and office occupier group, offering high quality amenities, services and meeting places in the urban layer. Sustainability and greenery will be integrated in the design of the project, such as green roofs and facades. In preparation of sketch design, the existing urban environment has been taken into account as well as light and shadow, wind, traffic studies have been conducted. The position of main sight corridors of the city has been respected in relation to the positioning of the buildings and their connectivity with the existing buildings.

In dialogue with main stakeholders

In September 2020, the owners of the Bellevue site invited key stakeholders who live, work or have a direct interest in the area to discuss and provide feedback on the proposed plans. The plans are in the sketch design phase and have been developed in close consultation with the municipality of The Hague, taking into account the existing building environment, the complexity of the area and the interests of various stakeholders involved. In September 2020, three online public consultation meetings were organised.

The municipality of The Hague and the architect presented the future development plans to the public and explained how the proposed development plans will contribute to the ambitions of the city and their fit with the city development agenda ‘Policy Campus Central’. Stakeholders had the opportunity to share their ideas and questions during these meetings. Additionally, an online survey was held to get the stakeholders’ opinions on several subjects. The online public consultation meetings can be rewatched here (in Dutch only).

Presentation of the future development plans by the owners of the Bellevue site and the municipality of The Hague.
Language: Dutch

Presentation of the results of the public consultation process.
Language: Dutch

The Hague, September 1, 2020 – The area around The Hague Central Station is one of the places where the city wants to realize homes and workplaces for the rapidly growing urban population in the coming years. The Bellevue location (the area between the Rijnstraat, Koningin Julianaplein, Bezuidenhoutseweg and the Oranjebuitensingel, next to the Hoftoren) will be transformed into a modern and lively part of the city center. In case you have any questions regarding the development plans and/or would you like to stay updated, please fill in the contact form below.

The participation process with residents and other key stakeholders involved in the area consists of three online meetings (webinars) held throughout the month of September. The public is kindly invited to share their views by participating in an  online survey, which will be available upon registration. The first online public meeting will be held on the 1st of September.

The minutes of the meetings, Q&A results and any other important materials as well as the results of the online public consultation survey will form part of the PUK document. The administrative process of the plans is expected to be completed by the end of this year

Upon approval of the PUK document, the plans will move into design phase, where the results of the public participation process will be taken into account. The final design documents and a new zoning plan (which will be prepared by the municipality after PUK process) will be presented and discussed with the public and key stakeholders. Public and key stakeholders will be invited to actively participate throughout the whole development process.